Four student teams presented in person and one presented virtually at TechLauncher’s hybrid ANU Technology Showcase on 24 May. More than 50 people attended the event hosted at the Canberra Innovation Network, with more than 80 people participating online.

TechLauncher serves as a bridge for students from their coursework to the real world. The projects are proposed by a real-world client in need of a tech solution, and the students form teams in order to solve them.

In his remarks, Prof Tony Hosking, director of the School of Computing, said that TechLauncher has become an integral part of the School and the degree programs it offers to its students.

Gretton said collaboration, teamwork, and “learning from and with peers” are key values and key goals for the program.

“The shining stars of technology that you hear from today are measured by their ability to create new things collaboratively with others, to step into the unknown, and to do this with professional rigor,” he said.

Xi (Chloe) Chen presented her team’s project virtually, as complications caused by the pandemic prevented her from traveling to Canberra this semester from China. Her team’s client, IO Energy, offers renewable energy at an 80% discount between 10AM and 3 PM, when renewable energy supplies are highest.

“We are currently using data analysis and machine learning tools to evaluate customers’ daily energy consumption,” she said. “In this way, we can help customers understand their energy consumption, persuade them to use more daytime energy, save costs, and reduce carbon emissions.”

Chen, who specialises in design, headed up the subteam developing user interface and user experience.

Gao said that if he could grade his client, he would give him an A+, adding that “working together with the most experienced programmers in the real industry” was awesome.

Simeon Pekkarinen, a spokesperson for the Project Jemma, agreed. “There’s definitely an extra layer of motivation compared to a normal assignment,” he said.

Jemma, a web platform that connects customers with tradespeople, has been developed entirely by TechLauncher students, Pekkarinen said, with student teams passing the baton from one TechLauncher semester to the next. 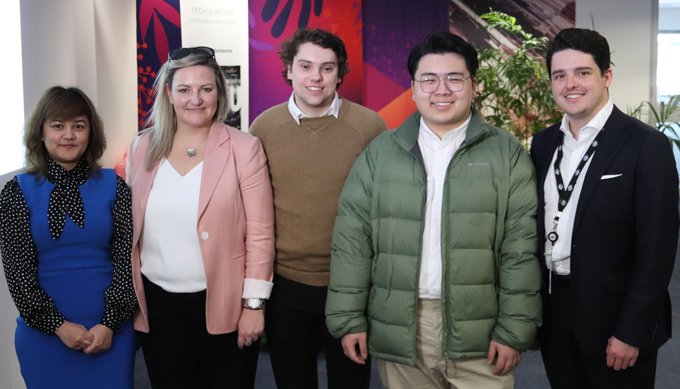 A panel of judges announced that the winning project was FireApp, an application that allows for volunteer fire fighters to enter their availability and location in order to enhance readiness to battle bushfires.

Representing the FireApp team were James Hewitt, who is in his final year studying a double degree in Bachelor of Business Administration and Information Technology,and Phillip La, a Bachelor of Software Engineering (Honours).

Winning a prize was hardly the point, as both Hewitt and Lu said they chose to work on FireApp because they wanted to apply their learning toward something that could make a difference in people’s lifes.

Asha Naznin served as a client for FireApp. An ANU alum and a Technology Consulting Analyst for Accenture Canberra Security, Naznin also serves on the ACT Bushfire Council.

Naznin said that she was very pleased with the way that Hewitt and La collaborated with the balance of the FireApp team, who contributed coding and design elements remotely from China: Juren Xu, Julia Ge, Chenhao Zhang, Hang Su, and Haoyu Weng.

“We learned a lot from them as well,” she said.

“They bring a lot of technical skills to the table, which is quite impressive for students, which are 19, 20, 21 years old,” said Young. “They brought a very critical eye and made a lot of improvements, which we weren’t actually expecting, which in the end has vastly improved the application.”

You are on Aboriginal land.

The Australian National University acknowledges, celebrates and pays our respects to the Ngunnawal and Ngambri people of the Canberra region and to all First Nations Australians on whose traditional lands we meet and work, and whose cultures are among the oldest continuing cultures in human history.